The other half and I took a wonderful trip to California. We were able to see so many beautiful places. 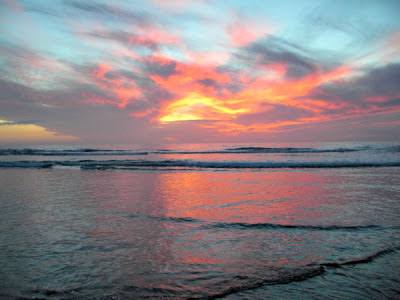 We flew into San Diego and spent a day and night there. We first stopped in La Jolla and enjoyed the beach, then we explored the city a while before checking out Coronado Island. We made it back to the beach just in time to take a nice stroll at sunset. We had a nice dinner in the Gaslamp Quarter before heading back to the hotel. 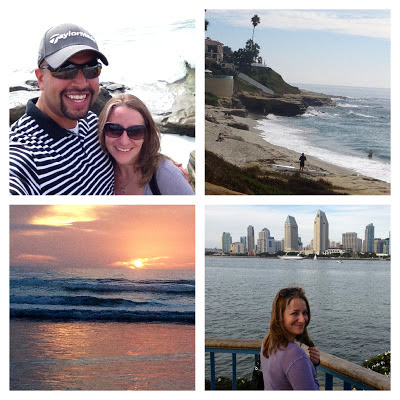 Now the other half and I are both training for a 1/2 marathon at the beginning of November so we had to try and be good and fit some running in even though we were on vacation. We heard from a local that a good place to run was Balboa Park so we parked the rental by the zoo and took off. So many museums and parks in that area. We were satisfied with a 5 mile run but we were able to see such beautiful
architecture, and gardens. There were tons of flower gardens, along with a beautiful Japanese reflection pond. What is lawn bowling by the way? Afterwards we had a great breakfast at a Hawaiian spot and hit the road heading north on the coast highway. 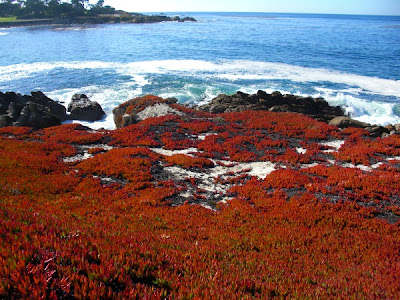 We made a quick stop in LA, it wasn't really for us. Hollywood is definitely not as glamorous as it is on tv. We then kept heading north stopping here and there along the way, the side of the highway to see the beautiful view, the seals, Pebble Beach, and we even stopped just outside of Malibu to climb this ginormous sand hill to watch the sunset. 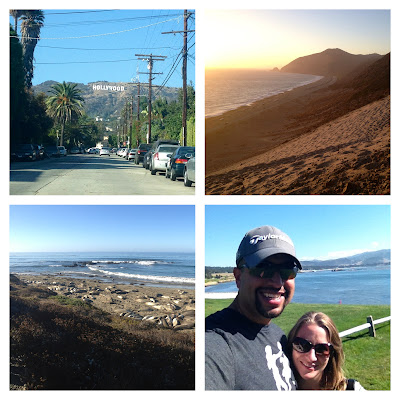 The other half really enjoyed driving on the winding roads on the cliffs right beside the beach. Me on the other hand, I was white knuckled yelling at him to slow down as he shifted gears with a silly grin on his face. I'm sure he was picturing himself in one of those expensive car commercials with the guy driving fast, shifting, with the upbeat pop music in the background. 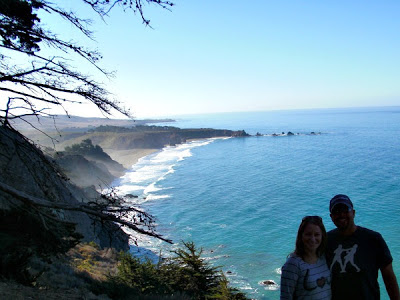 We enjoyed lunch in Monterrey before heading on up to San Francisco. Oh how I loved San Francisco. We got in that evening so we found a hotel downtown and walked to China Town for dinner, for a very interesting, authentic dinner. Then we walked back to the hotel stopping at a pub on the way. The next day we really went on an adventure. Before we figured out the public transportation system and bought a day pass we walked everywhere, and you know San Fran has a lot of hills. I was sore for the next two days. I swear, if I lived there I would have a great tight butt and nice legs. We saw Lombard St, Coit Tower, Pier 39, Fisherman's Wharf, and Ghirardelli Square. We checked out Union Square, enjoyed a beer or two in the Castro district, and thought we would want to see Height-Ashbury until we realized that modern hippies are not the same as Woodstock hippies. We ended our day at the Golden Gate Bridge on our way to Napa 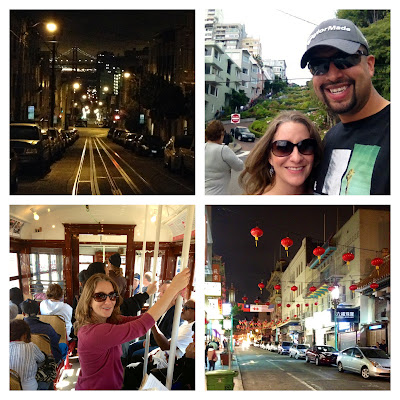 Because we walked so much around SF I feel like we really saw the whole city. I don't feel like I missed anything, even if I did. I now believe that this is the way I'm going to get around for the next vaca. Walking and public transportation, it's the way to go. So what is it about the Golden Gate Bridge that is so fascinating? I mean, it's just a bridge. Did you know, more people die by suicide there than at any other site in the world? (Wiki) It's sad because it's such a beautiful place. 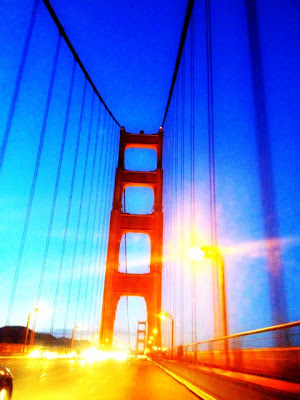 Another beautiful place was Napa. Not only is it gorgeous country, but did you know they have wine there? I know! Hard to believe they make wine out in the middle of nowhere. :) Loved Sterling Vineyards! Also went to Beringer, Robert Mondovi, and Artesa. A great, relaxing, beautiful day. 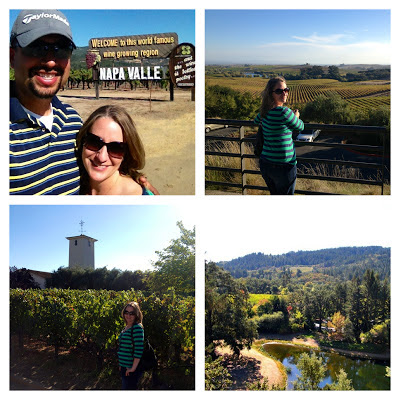 Next stop, Yosemite! Wow, another enchanting place. I love California! The other half really enjoyed Yosemite more than I thought he would. I never thought of him as much of an outdoorsy type, but he was going around snapping photos like nobodies business. There were a lot of times we were just in awe of the view in front of us. 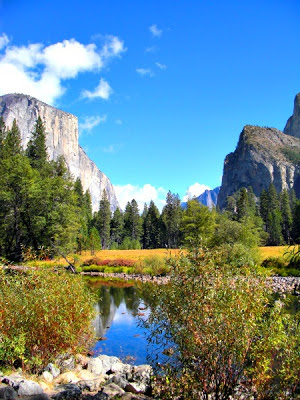 We drove around, and hiked around Yosemite and then continued through the Sierra Nevada's to head back to where we started. Going through the mountains was exciting. We even ran into snow and played in the snow a bit. 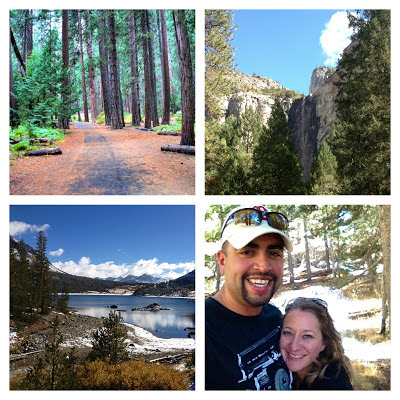 After a long drive we finally ended up back in San Diego. From snow capped mountains to warm sandy beaches. This was one of the best road trips I have ever been on. 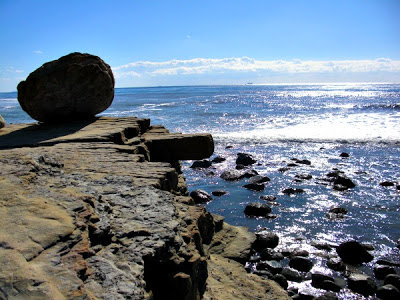 We hung out in Little Italy and had lunch, checked out the ballpark, and Point Loma. Then we went out to the Gaslamp District again that night for a little fun. Maybe a little too much fun. :) 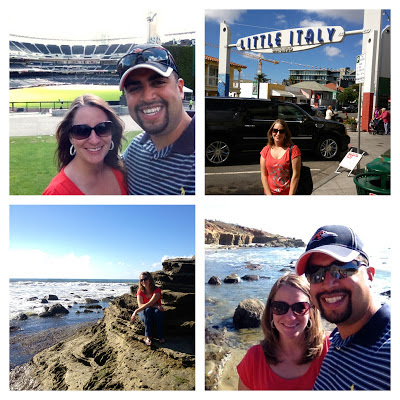 This trip was amazing! It was ALL my favorite. We couldn't have planned it any better.
Posted by Kristin at 9:08 PM No comments:
Email ThisBlogThis!Share to TwitterShare to FacebookShare to Pinterest
Labels: personal, travel 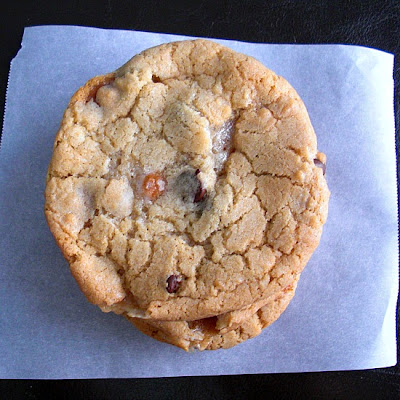 I was tailgating before one of our local college games, and I'm always in charge of dessert. I felt lazy that week and didn't want to actually make something so decided to go with a dessert that would let my laziness shine through, but would be impressive enough to take for a crowd. I decided on Pioneer Woman's campfire banana boats. I had seen it on a recent episode on the food network. It turned out that they were perfect for tailgating! Just throw them on the grill right after the burgers. Anyway, afterwards I had a lot of left over ingredients to throw in these cookies for mix ins.

So I had chocolate chips, caramel bits, and marshmallows, and I thought other than hoarding them on the couch and eating them right out of the bag, I had better throw them in some cookies so others could benefit. I used a cookie base from Picky Palate, but of course your favorite cookie base will work just fine. I loved the way the caramel and marshmallow melted into the cookies. Why are cookies so addictive?

What is your favorite cookie? Send me the recipe and we'll decide on the best. (A good excuse for me to eat more cookies)

Directions
1.  Preheat oven to 350 degrees F. and line a large baking sheet with a silpat liner or parchment paper.

2.  In a stand or electric mixer, cream the butter and sugars until light and creamy. Add eggs then vanilla until well combined.

4.  With a medium cookies scoop, scoop dough onto prepared baking sheet about 1 inch apart. Bake for 12-15 minutes until edges start to turn golden brown. Remove and let cool for 5 minutes before transferring to cooling rack. Serve with a tall glass of milk.